THE MOST SPECTACULAR TRAIN RACE IN THE WORLD.

Thank you for signing up for the 2022 Cairns 2 Kuranda train race and supporting Trinity Family Chiropractic, a local company established in 1998. We are thrilled to welcome back competitors from previous years and all new comers.

A BREAKDOWN OF THE EVENT:

Solo Event: 18 km’s: Aimed at experienced runners 18 years and over who must be able to complete the course in 3 hours.

At 2.5km, runners turn right entering a grassed area on the banks of the mighty Barron River in the Kamerunga Conservation Park. Heading up stream at 3km the track passes under the Kamerunga Bridge and the lowest point of the run, just above sea level. Shortly after the track joins the small roundabout on Stoney Creek Road. Here the runners enjoy several hundred metres of flat road running, before a rollercoaster climb into Stoney Creek and the end of the first relay leg (5km).

At the relay change over and drink station, runners enter the Barron Gorge National Park.

It is compulsory to carry a hydration device on the trail section. Water stations will be located at 5km and 13km points.

Immediately after crossing Stoney Creek via an old bridge you turn right onto the Douglas Track and the serious climb begins. For the next 3km runners are on steep single track, in dense tropical rainforest, which has slippery tree roots and rocks to test the most seasoned trail runner. It is important to remember to give way to other track users, as we don’t have sole use of this wonderful park. Towards the top a steel bridge is reached, and you must cross the rail track here.

At no time during the race are runners to be on or near the rail tracks.

With a bit more climbing on a narrow switch back track through a grassed area the junction with McDonalds Track. Take the time to observe the stunning view over Cairns and the Coral Sea.

From here runners follow the Barron Gorge on an undulating 4WD track passing through the 400m point in elevation three times. Surprise Creek is crossed on a steel bridge at 11km. This marks the beginning of the last major climb of the day, and runners enter an area of casuarina and cypress forest.

Wright’s Lookout marks the final relay change over and another drink station at the 13km point. This year will see a major course change in the last road section in Kuranda. At the Barron Falls Lookout carpark entrance, runners will proceed along a newly formed and sealed bush track to meet with the Jum Rum track about 1/2 way down. The new section will have some ups and downs, including a few stairs. The only part on the road will be between Wrights Lookout and the entrance to the trail. The Jum Rum track descends to the banks of the Barron River, passing underneath the rail tracks. From here it’s a flat run through a stand of Melaleuca trees to the finish line, just below the Kuranda Station, and just maybe you have beaten the train.

This year marks the 12th anniversary of this fantastic event. Aerial view of the course Map of the course 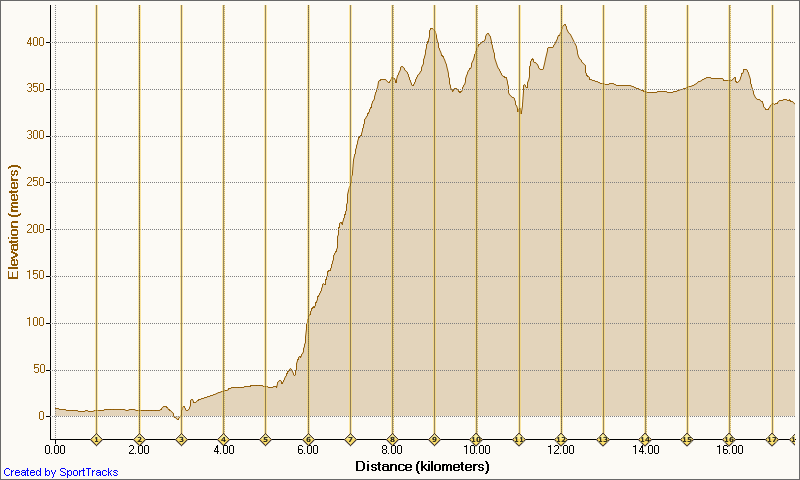 Profile of the course

Arrive: prior to race briefing at 0830, all runners to report to registration table at the Pony Club to get race number. Small gear bags can be transported to finish line, please leave them at the registration table. Drop off water pack on Pam’s morris minor ute (please clearly ID your hydration pack) if you want to collect at Barron Gorge Park Entrance, Stoney Creek – 5km point. Toilet facilities: available at Freshwater Railway Station.

Race Road Rules/Permit Conditions: all runners to stay on Right Hand Side of Road DO NOT CUT THE CORNERS, running towards traffic. You MUST run no more than 2 abreast, unless passing another runner. Give way to all traffic at all times (runners do not have right of way). Follow any direction of police officer or race marshal (wearing fluoro tops). Support vehicles are not to pace runners or delay other road users.

Race Numbers: all runners must pick up race numbers at start (including team members). Race numbers must be pinned to the front of your top or shorts so as to be clearly visible to marshals and timekeepers at all times. Return race numbers at the finish, they will be used for random spot prize draws.

Race Etiquette: at no point will abusive behaviour towards police officers, drink station volunteers or race marshals be tolerated.

Parklands: give way to all other track users (essential on the Douglas Track – single track). Respect the environment, drop cups at drink stations for easy clean up. Beware of moving sticks/snakes and human size chooks/cassowaries.

Drink Stations: Please hydrate properly before and during this event.

It is compulsory to carry a hydration device on the trail section. Water stations will be located at 5km and 13km points.

Relay Teams: it is your responsibility to get to changeover points. 1st point at Stoney Creek car park, 2nd point at Wrights Lookout.

Prize giving is at approximately 11.30am on the river bank at the race finish. Please hand in race number for spot prize draw, you must be present at the prize giving to claim spot prizes. Trophies will be awarded to 1st, 2nd and 3rd OPEN and 45+ Men’s and Women’s, Prizes for 1st 3 teams.

Runners/Teams that have beaten the train...

At Trinity Family Chiropractic we have been organising fun runs in the Cairns Region since the year 2000, some of you may have been amongst the 126 entrants in the brutal 5km Smithfield Shopping Centre to the top of Chatham Terrace and back (hills have always been a favourite).

Alan Courtney organised his 1st trail race in 1987, the Mangaone Bush Run, New Zealand. We endeavour to promote healthy lifestyles in the community and consider daily running and walking to be essential components of this.